Lower Saxony's State Secretary for Digitalization, Stefan Muhle, formally opens the cooperation between NavCert GmbH and Flughafen Braunschweig-Wolfsburg GmbH for the use of the airport in the assessment of UAS according to the Delegated Regulation EU 2019/945. 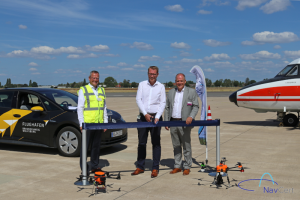 On August 10, 2022, Lower Saxony's State Secretary for Digitalization, Stefan Muhle, formally opened the cooperation between NavCert GmbH and Flughafen Braunschweig-Wolfsburg GmbH for the use of the airport for the performance of the assessment of UAS according to the Delegated Regulation EU 2019/945 by NavCert GmbH.

Thus, NavCert offers manufacturers and service providers a solution for the required pre-testing and type testing/certification of UAS as a formal proof that enables the distribution and use of the UAS within the European territory. These services will strengthen UAS suppliers in Lower Saxony, in Germany and outside.

Do you also need to ensure that your UAS complies with the requirements of DR 2019/945 including the EN 4709 series? Do not hesitate and send your request to info[at]navcert.de.

"The future use of Braunschweig Wolfsburg Airport for the certification of drones is another forward-looking focus for our airport operations" underlines Mr. Michael Schwarz, Managing Director Flughafen Braunschweig-Wolfsburg GmbH. "We are looking forward to supporting NavCert with our airport infrastructure as an important system partner! "NavCert's competencies have already been confirmed several times through accreditation by the German Accreditation Body (DAkkS). This was reaffirmed in 2022 with the formal designation as a Notified Body (NB 2603) by the German Federal Office of Civil Aeronautics (LBA).

NavCert GmbH is now one of the few companies that are allowed to perform these mandatory conformity tests. NavCert is happy to continue to actively provide its specific know-how in European committees for the creation of the EN 4709 series of standards. The goal of providing our expertise and investment in the delivery of these services is to help enable the safe use of UAS solutions in our society. We are pleased that we can now also use Braunschweig-Wolfsburg Airport to achieve this goal and thus expand the position of the state of Lower Saxony," says Marcel Visser, Managing Director of NavCert GmbH.

"The cooperation between the Braunschweig Research Airport and NavCert is another important component in developing Lower Saxony into a world-leading location for drone technologies, applications and testing. The cooperation will strengthen and expand the network that has been established around UAS. At the current stage of technological development, this is the most important thing: exchange, learning from each other and cooperation across sectors," said Stefan Muhle, Lower Saxony's State Secretary for Digitalization.

Drones, called unmanned aircraft systems or UAS (Unmanned Aircraft Systems) are becoming a common sight today. As use for photographic and recreational use expands to more critical, truly unmanned applications for agriculture, maintenance or other uses, it is critical that safety be assured from these systems. While most drone applications do not yet require certification on European territory, this will change by January 1, 2024.

NavCert GmbH has been successfully performing independent assessments, voluntary certifications and EU type examinations of GNSS systems and solutions since 2006. In 2012, NavCert was accredited as an ISO 17025 laboratory by the German Accreditation Body (DAkkS). Since April 2022, NavCert has additionally been appointed as a Notified Body (NB 2603) for EU Type Examination of UAS according to the European Regulation EU DR 2019/945. Furthermore, in July 2022, NavCert was elected to chair the Coordination Group of European Notified Bodies for UAS according to Delegated Regulation 2019/945. For more information about NavCert, please visit: navcert website | certification or send an email: info[at]navcert.com.